Delighted to be a partner of the regatta for the third consecutive year, Aston Martin is featuring the DB11 Volante throughout the event. Skilled craftsmen from Vaughtons, the makers of Aston Martin badges, will be on-hand to demonstrate how the iconic wings are formed from a single piece of sheet metal into a glorious enamelled and chrome plated badge. Produced in Birmingham’s Jewellery Quarter each wings badge takes twenty hours to manufacture by hand. A sign of quality for each and every Aston Martin sports car, it is the final item added on the production line at the company’s global manufacturing facility, Gaydon.

More than 300 races of international competition will take place over the event which includes Olympic rowers as well as newly formed crews. Aston Martin patron Alex Gregory will be attending to host guests of Aston Martin. Over the course of his prestigious career, Alex has won two Olympic gold medals and six times at Henley Royal Regatta.

Speaking about the long-standing partnership, Simon Sproule, Vice President and Chief Marketing Officer at Aston Martin Lagonda, said: “When Aston Martin was created by Lionel Martin and Robert Bamford in 1913, Henley Royal Regatta was a well-established event in the British social calendar. Fast-forward more than one hundred years and it is a delight that two such iconic symbols of British sports and performance can come together to celebrate such a milestone of the British summer season.” 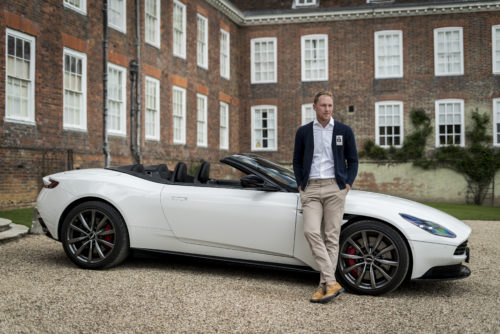