13 June 2018, Le Mans: As Aston Martin returns to Le Mans to defend its 2017 victory at the iconic 24-hour race, so the latest car in the exciting new AMR stable has been unveiled. Following hot on the heels of the DB11 AMR, Aston Martin has revealed the limited edition Rapide AMR. This production version of the concept shown at Geneva last year is limited to just 210 cars.
AMR stands for Aston Martin Racing and the brand draws a direct engineering and aesthetic link between the company’s successful race team and its road cars. As such the Rapide AMR is a sports car capable of comfortably transporting a team of race drivers to a circuit on the other side of a continent and then tackling the track when they get there.
Aston Martin President & Chief Executive Officer, Dr Andy Palmer, commented: ‘AMR takes technology and inspiration from our motorsport programme to amplify the sporting prowess in our road cars which is clear to see in the Rapide AMR, Aston Martin’s most extreme, 4-door sports car. With enhanced performance, sharper dynamics and more powerful design language, Aston Martin has taken Rapide to new and exciting extremes.”
The design of the new 205mph Rapide AMR has changed little from the concept that was shown at the Geneva motorshow in 2017, with a large and aggressive front grille that is reminiscent of the extreme track-only Vantage AMR Pro. Meanwhile the circular daytime running lights recall the recent Zagato models.
The Rapide AMR’s aerodynamics have been tuned to reduce lift while retaining a neutral balance and the extra aerodynamic bodywork such as the splitter, sills, rear diffuser and boot lid lip spoiler are all carbon fibre. The new bonnet with large ventilation inserts is also made from carbon fibre to minimise weight.
At the heart of the Rapide AMR is a naturally aspirated drivetrain that draws much of its technology and character from the potent Aston Martin Vantage GT12. Larger inlet manifolds with tuned length dual inlet runners enhance the airflow into the 6.0-litre V12 engine and, combined with new engine and gearbox calibration, this results in an increase in power. The legendary V12 now puts out 603PS and 630NM of torque, while a new quad exhaust ensures a raucous sound befitting of the AMR badge.
To help harness all of this power and to launch from 0-60mph in just 4.2 seconds (0-100km/h in 4.4 seconds), the Rapide AMR has 21-inch wheels – a first for any Aston Martin – paired with ultra-high performance Michelin Super Sport tyres. The large, forged wheels have a multi spoke design that is not only very stiff but also aids brake cooling. To further aid thermal management of the brakes, the Rapide AMR utilises an evolution of the cooling system on the Vanquish S, with modified brake ducts and dust shields.
As standard, the Rapide AMR comes fitted with carbon ceramic brakes. Measuring 400mm at the front with six piston calipers and 360mm at the rear with four piston calipers, this is the first time that a Rapide has been fitted with such stopping power. The carbon ceramic discs are also part of AMR’s ethos to use lightweight components whilst reducing unsprung mass they have a noticeably beneficial effect on the driving experience.
Alongside the new tyres, brakes and aerodynamics, the Rapide’s suspension has also received considerable attention. The new Rapide AMR rides 10mm lower than a Rapide S and although the three stage adaptive dampers remain, they have been thoroughly reengineered to create a car that is more focused, agile and dynamic. Much of this development work has been completed at the newly opened AMR Performance Centre at the Nürburgring.
The Rapide AMR will be available in three different design schemes. The Standard and Silhouette schemes offer four colours – Mariana Blue, Scintilla Silver, Lightning Silver and Onyx Black – with the Standard scheme adding AMR Lime accents to the splitter, sills and rear diffuser. The Silhouette scheme eschews the Lime accents and instead adds a full-length contrasting stripe in China Grey or Clubsport White.
The Signature scheme matches Stirling Green paint with Lime accents and a Lime stripe for the definitive AMR look. This draws the closest visual link to the Aston Martin Racing team and the liveries of its race cars.
The interior of each Rapide AMR reflects the design scheme chosen for the exterior, with either AMR Lime or Galena Silver welting and stitching. There is a full-length carbon fibre centre console and the seats are trimmed in Alcantara - both firsts for a Rapide. Also available for the first time as an option is a One-77 style steering wheel. Every car has discrete AMR logos stitched into the seats in Galena Silver and each car will come with a limited-edition AMR inspection plaque as well as AMR branding on the carbon sill plaques.
In addition to the three design schemes, customers will also be able make use of Q by Aston Martin to further personalise their car.
The Aston Martin Rapide AMR will be available globally with the exception of China and Russia and is available from £194,950 in the UK, $240,000 in the US and €229,950 in Germany, with first customer deliveries in Q4 2018. 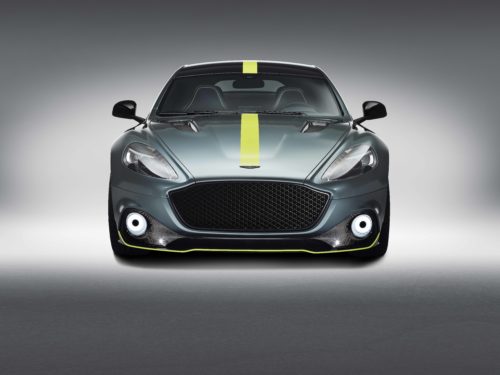 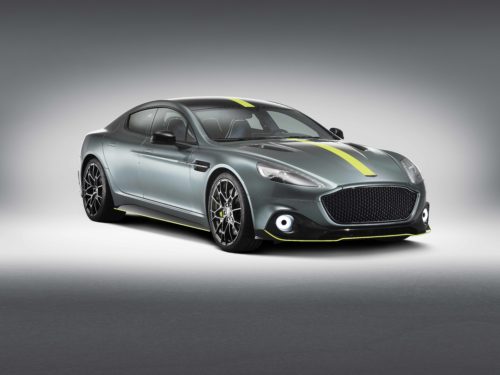 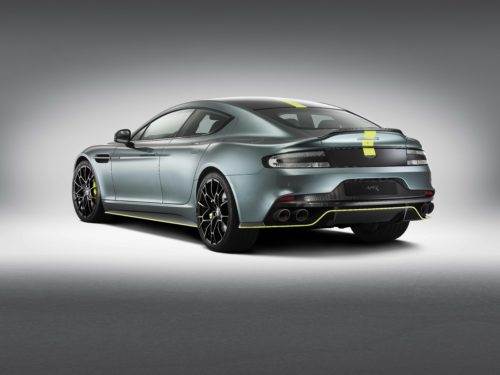 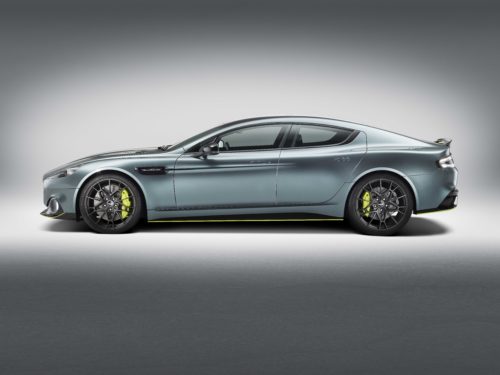 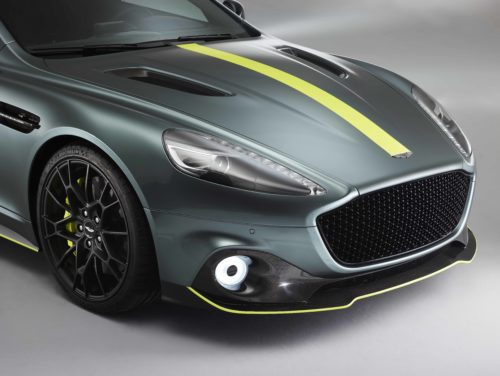 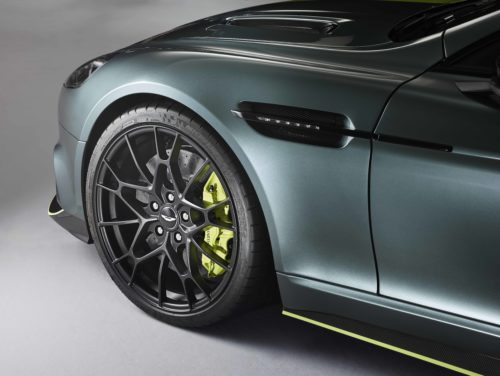 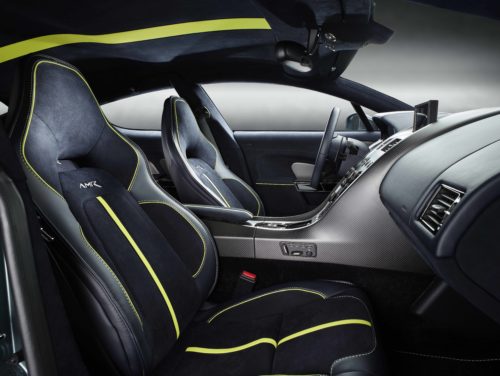 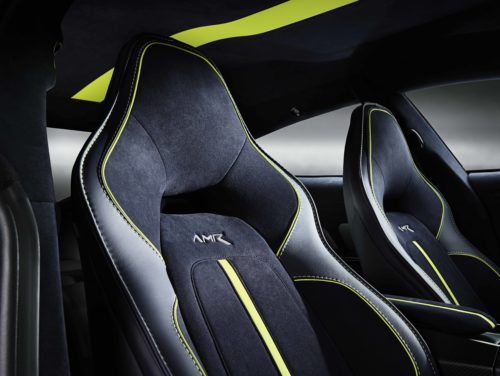 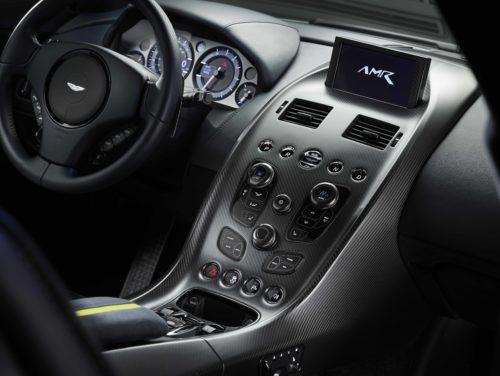