04 July 2019, Goodwood: Founded on a love for motorsport, Aston Martin’s racing history is as old as the company itself. In 2019, the marque celebrates two significant anniversaries – 60 years since its iconic 1-2 win at the 24 Hours of Le Mans and 70 years since the company first raced at the Goodwood Motor Circuit. It is fitting then that the Central Feature at Festival of Speed this year celebrates the famous British marque and even more poignantly, the brand’s long-term love affair with motorsport.

Designed by Gerry Judah, the Central Feature is a 30-metre-high swoop of steel with the Le Mans winning Aston Martin DBR1 racing towards the sky on a never-ending race track. To complement the Central Feature, ‘Q by Aston Martin’ - the luxury brand’s bespoke personalisation service - has designed six unique Vantages, each honoring a famous race car from the company’s long and prestigious history. Vantage was an obvious starting point for the project as Aston Martin’s modern race car.

Aston Martin will only make 60 ‘Vantage Heritage Racing Editions’ with customers able to choose one of the six liveries. The collection also introduces a new aero kit adding a staggering 194kg of downforce at 190mph. Now available on all Vantages, the aero kit has been developed by Aston Martin’s aerodynamics team to ensure that the already impressive performance of the two-seater sportscar remains unchanged.

The oldest racing car to provide inspiration for the series is Razor Blade. ‘The Record Breaker’, Razor Blade set two class records in the 1500CC light car class at Brooklands in 1923. To create the design, ‘Q by Aston Martin’ colour matched the green on ‘The Record Breaker’ to be the exact same pantone of the original chassis. The silver acknowledges the aluminum streamlined body constructed by aircraft manufacturer De Havilland.

‘The Italian Progettista’ pays homage to Aston Martin’s most iconic pre-war racing model, the Ulster. An Ulster finished third overall at the 24 Hours of Le Mans in 1935, winning its class and placing fourth in the RAC Tourist Trophy Race. The red of the bodywork perfectly matches the original team colour scheme and the ‘Aston Martin’ lettering on the side gill nods to the distinctive script that was hand painted on the bonnets of the team cars.

The DB3S has inspired the ’The David Brown Era’ Vantage. Aston Martin used different colours on individual race cars to help with identification during racing. The yellow and green DB3S has become one of the most iconic liveries making it the perfect choice for the project.

Also celebrated is AMR1, ‘The Group C Monster’. The Nimrod successor was developed in 1989 to participate in the Group C racing series and bristled with radical new technology including a kevlar/carbon-fibre monocoque chassis – a radical development in 1989. Recognised for the distinctive white, blue and red livery, ‘Q by Aston Martin’ have worked tirelessly to colour match the original palette to create the striking design.

A nod to the endurance racing series that Aston Martin has been competing in since 1928 is ‘The Le Mans Winner’ Vantage. The DBR9 was Aston Martin’s challenge to the GT class, winning the 24 Hours of Le Mans in both 2007 and 2008 making it back to back class wins for Aston Martin. The ‘Gulf’ livery is one of the best-known designs in motorsport and so it was vital that it matched the original perfectly, to achieve a cohesive and modern design.

Finally, the collection concludes with the ‘The Next Generation’ which honours the modern racing Vantage GTE. Inspired by Aston Martin’s current offering to the world of motorsport, ‘Q by Aston Martin’ matched the Lime Essence and Stirling Green colour displayed on the body panels of the official race car, replicating the racer that currently competes in the world’s toughest endurance series – the FIA World Endurance Championship (WEC).

When Lionel Martin and Robert Bamford formed Aston Martin 106 years ago, it was created to support their joint passion for motorsport. When the company was then taken over by the industrialist David Brown, he pushed the company to create DBR1 and thus the perfect racer was born. Little has changed under the stewardship of Aston Martin’s current President and Group CEO, Andy Palmer, with the Aston Martin hypercar, Aston Martin Valkyrie, destined to compete in the 2020/2021 WEC season.

When speaking about the Central Feature, Andy Palmer, Aston Martin Lagonda President and Group CEO, said: “It is a great honour to be celebrated at Goodwood Festival of Speed this year. Racing is a crucial component in Aston Martin’s DNA and it is something that we have pursued since the inception of the company more than 100 years ago. We have raced all around the world but the core passion and commitment that we’ve displayed has remained the same since our first race on Aston Hill.”

Each of the six Vantages will be displayed under the Central Feature at Goodwood Festival of Speed for every day of the festival. A nod to Aston Martin’s long-standing relationship with racing and its commitment to both beauty and speed.

For more information on the attractions at the Goodwood Festival of Speed please visit https://www.goodwood.com/motorsport/festival-of-speed/. 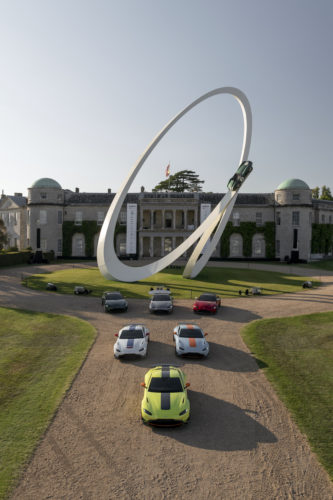 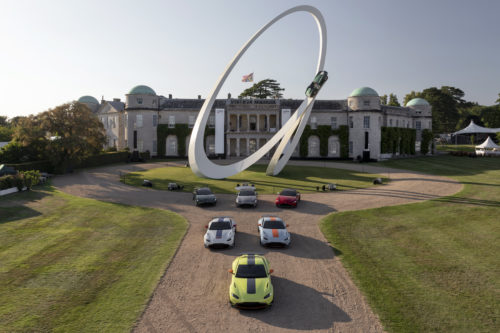 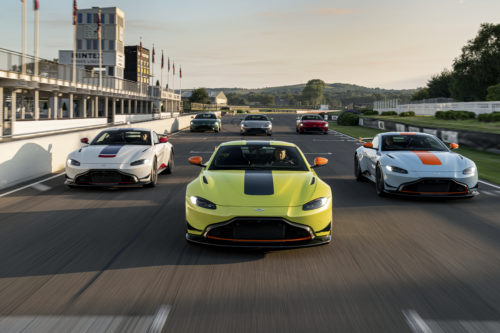 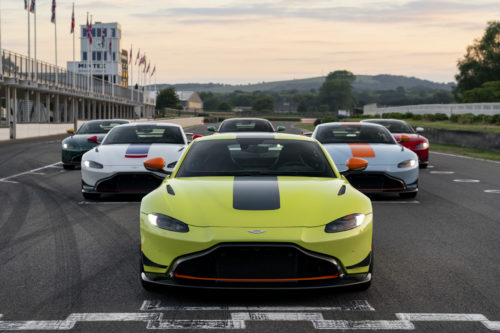 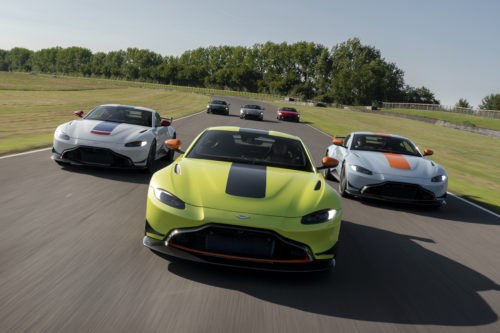 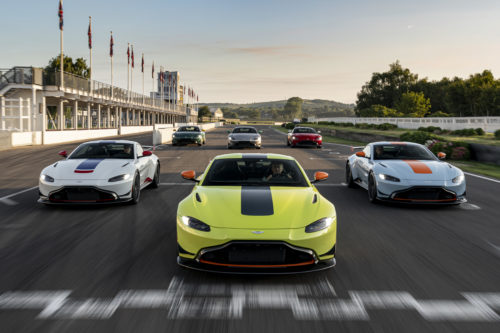 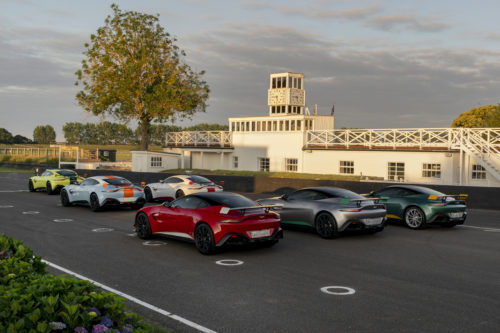 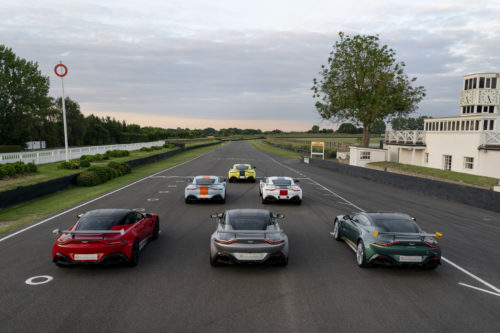 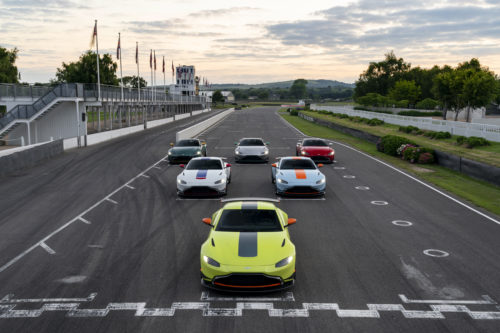 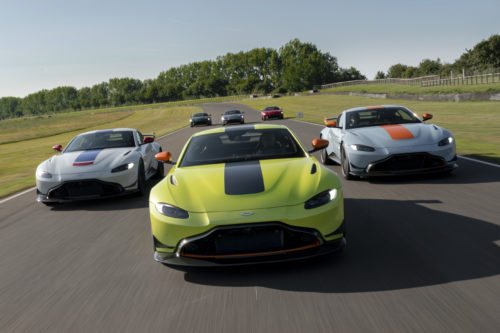 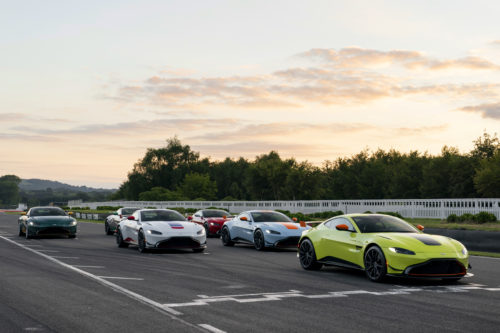