LAGONDA REVEALS THE FUTURE OF THE LUXURY SUV


5 March 2019, Geneva, Switzerland: Aston Martin Lagonda is proud to present the Lagonda All-Terrain Concept, continuing the journey towards a new range of state of the art, luxury vehicles driven by zero emission powertrain technologies. Lagonda production is planned to start in 2022 at a new state of the art facility in St Athan, Wales - Aston Martin Lagonda’s ‘Home of Electrification’.

Built around near-future technologies such as its advanced Battery Electric drivetrain, the Lagonda All-Terrain Concept is an ultra-stylish, supremely luxurious, fully electric emission-free vehicle that can transport its occupants to remote and spectacular locations. It develops the designs and materials seen in last year’s widely acclaimed Lagonda Vision Concept, tailoring them for the new and challenging environments that an all-terrain vehicle is capable of reaching.

Lagonda aims to be the world’s first zero emission luxury brand. It will confound traditional thinking and take full advantage of the latest advances in both electrification and autonomous driving technologies, which amount to the biggest revolution in land-bound transportation since the invention of the car. Lagonda will show how true luxury and modern design, far from being diametrically opposed interests, can exist in total harmony and enhance each other’s most desirable characteristics.

Andy Palmer, Aston Martin Lagonda President and Group Chief Executive Officer said: ‘The Lagonda All-Terrain Concept adds a hugely exciting sense of adventure to the unique brand of luxury, emission-free vehicles that Lagonda is planning to produce. This is a car that would be at home whisking someone straight from a glamorous red carpet event to a remote scientific research lab. It shows the bold possibilities for Lagonda and demonstrates how the company will push to expand horizons in every area, whether it be technology, design or scope of travel.’

The Lagonda All-Terrain Concept is a near future study that continues the evolution of a design language that could be seen in production Lagonda models as soon as 2022. Where the Lagonda Vision Concept shown at last year’s Geneva motor show was purely focused on road travel, this new vehicle broadens Lagonda’s horizons. It appeals to a pioneering spirit of adventure and such is its futuristic design that you could just as easily imagine it roaming the surface of Mars as a mountain in Scotland.

In the same way that the exterior design of the Vision Concept took some of its inspiration from Concorde, so the Lagonda All-Terrain Concept has taken some of its initial design language from the world of the super yacht. There is a relaxed elegance to the rear-leaning gesture of the belt line, but there is also an inherent robustness that is in-keeping with the terrains that the vehicle is designed to tackle. The surfacing is incredibly futuristic, with forms and shapes that look like they have been created by the huge, planetary forces of gravity fields.

Thanks to a large proportion of the vehicle’s stiffness coming from the floor where the batteries are stored, the designers have once again been able to fit rear-hinged back doors. These not only allow for a spectacular ‘red carpet’ moment as the interior and its occupants are revealed but, when combined with the sections of roof that open upwards, also enable wonderfully easy ingress and egress.

The sense of wonder continues at the rear of the car. Set into the very wide clamshell rear hatch, is a thin and elegant light strip that cleverly hides the source of its illumination. Light is beamed downwards and then reflected out, so that the actual LEDs are hidden from the viewer. This not only gives a very clean look to the light, but also lends an air of magic to its operation, turning the functional into the fantastic.

Another practical yet sleekly pleasing element of the Lagonda All-Terrain Concept’s design is the rear shelf, which slides out from the floor. Hidden, flush with the body when stowed, the shelf extends when required in order to offer a platform for occupants to perch on. Given the extraordinary views that the Lagonda All-Terrain Concept can transport its occupants to, it seems only right that it should offer somewhere for them to sit and survey the landscape.

The interior of the vehicle develops many of the bold design elements first seen in the Vision Concept, but while that possessed a rear-seat-biased limousine atmosphere, the Lagonda All-Terrain Concept has a more even-handed ambiance spread between all four seats. So, while there is still the option of rotating the two front seats to face the rear two during autonomous operation, there is a greater expectation that the vehicle will be controlled by the driver during the journeys that it will undertake.

Overall there is a darker, more nocturnal treatment to the colour and trim choices. When considering the materials and mood of the cabin, the intention was that it should feel like a seamless transition between the vehicle and the owner’s home. ‘We imagined that the owner would be a sort of pioneering yet environmentally conscious person’ said Aston Martin EVP and Chief Creative Officer, Marek Reichman. ‘They may well have a luxury villa in a remote place that acts as their sanctuary. As such, the Lagonda brand is unconstrained by the traditional values of current luxury products, it is not about wood and leather, we tried to design the interior to feel very calm and quiet with soft, natural materials like Cashmere. Lagonda reflects a future that is full of unique materials that are not set in the past.’

Feelings of time and space are also attributes associated with luxury and as such the interior of the Lagonda All-Terrain Concept does its utmost to enhance those aspects. The lines and focal colours inside the car draw upon techniques known since the masters of the Renaissance in their ability to draw the eye and utilise perspective. Also, key is the view out, which is expansive in that it draws the eye not only to the front and sides but also upwards. This allows the occupants to look both along streets or valleys and up to the buildings or peaks surrounding them.

Technology is an important but subtle part of the interior. Thanks to clever and considered integration, there isn’t the usual punctuation of vents, grilles and speakers. However, that’s not to say that everything is hidden. While the technology exists in this day and age to allow the key to be removed altogether, Lagonda believes that it remains an important point of contact between the driver and the vehicle. As such, the key is celebrated and indeed elevated in the interior of the Lagonda All-Terrain Concept. Thanks to the wonder of electromagnets, the key floats when it is placed in position, levitating between the front seats.

‘We wanted the technology in the Lagonda All-Terrain Concept to bring a sense of personality to the vehicle’ commented Reichman. ‘Just as with the materials and the exterior design, the technology should be warm and involving rather than cold and impersonal. This is the future and it should be something that people are inspired and delighted by rather than perplexed and frightened by.’

Although currently at the concept stage, it already has a home. When Lagonda’s first model reaches production, it will be produced at Aston Martin Lagonda’s brand new facility in Wales. The St Athan site, which started life as a series of Ministry of Defence ‘Super Hangars’, is currently being completely transformed into a state-of-the-art luxury manufacturing plant. This will be Aston Martin Lagonda’s second production facility and ultimately it will become the company’s ‘Home of Electrification’.

Over 70 Welsh employees have now joined the already 100-strong St Athan team, having spent the last two-and-a-half years at Aston Martin Lagonda’s Gaydon Headquarters. This core group of experts will train new employees at the St Athan plant. They’re sure to be busy with the workforce steadily increasing during the first half of 2019, then expanding rapidly to more than 700 by the first quarter of 2020.

Palmer commented: ‘As the St Athan facility nears completion, there is a very real sense this is the start of a bold new era for Aston Martin Lagonda. A second production facility is a critical step in delivering our Second Century Plan. The St Athan facility will initially commence with the production of the Aston Martin DBX but will ultimately be a global centre of excellence for the production of luxury high performance EVs, including Lagonda: the world’s first luxury electric automotive brand.’

The Lagonda All-Terrain Concept provides numerous clues to the exciting Lagonda models of the future. It embodies the vision for Lagonda to be a standalone marque that will break through long-standing boundaries and transform the way people perceive luxury transport. As demonstrated in the concept, this will be done through the use of cutting edge design, creating technologically radical, visually spectacular, thoroughly modern and ultra-luxurious vehicles that will overturn conventional thinking. Lagonda’s ambitions also go beyond automotive, it is a luxury brand which, although currently operating in the automotive sphere, can go anywhere and do anything that is consistent with the values of the brand.

Just like the Lagonda All-Terrain Concept, production Lagonda models will not only be supremely spacious, cosseting and exquisitely appointed, but also bold and forward thinking, bristling with creativity and innovation from the way they are designed to the engineering they contain. They will prove that the old conflicts – those between high performance and zero emissions, technological sophistication and the purest luxury – are conflicts no more. Lagonda believes the increase in new automotive technologies from efficient electrification to autonomous driving provides a unique opportunity for a new brand bearing one of the greatest names in motoring to rewrite a rulebook that has been allowed to stagnate for too long.

Above all, Lagonda will remain faithful to the forward thinking, ever adventurous spirit of Wilbur Gunn, the Anglo-American engineer and entrepreneur who founded Lagonda in a greenhouse at his home in Staines to the west of London in 1899. A man whose talents stretched from opera singing to riverboat building, he named his company after the Lagonda Creek river that ran through the town of Springfield in his native Ohio. His cars were always innovative: for example, the 16/18hp model that won the Moscow to St Petersburg trial in 1910 boasted not only trailing arm rear suspension but a form of monocoque construction, decades before its advantages were realised by the bulk of the world’s car manufacturers. He succeeded because he refused to accept that the current way was the only way. Lagonda went on to become not only one of the most coveted car brands in the world, but among the most versatile too. In its 1930s heyday Lagonda was capable of producing V12-powered limousines, and sports cars strong and quick enough to win Le Mans, which one duly did in 1935. Bought by Aston Martin in 1947, Lagonda continued to innovate, never more so than with the extraordinary Aston Martin Lagonda of the 1970s,1980s and 1990’s to this day one of the most audacious and strikingly styled cars ever designed.

Modern Lagonda products will be inspired by these pioneering designs and, like them, be steadfast in their focus on the future. ‘We see no limits for Lagonda,’ says Palmer, ‘it will be a brand for the restless, for those who are anything but happy with the status quo. It will produce cars that exploit technology, without being obsessed with it for its own sake. And It will enable Lagonda to redefine the concept of luxury within the automotive and other spheres.

‘The car has been the greatest liberating force humankind has invented, and at the time the journey was as important as the destination. All that has been lost over the last 100 years. Wherever you are in a Lagonda, whatever the journey and whichever seat you occupy, it will re-introduce you to the wonder of travel.’ 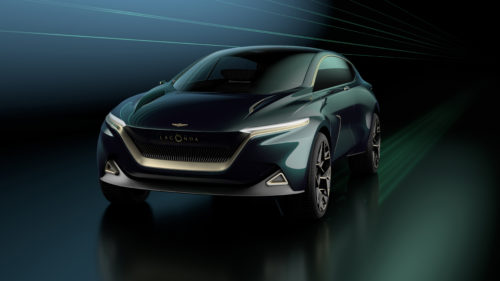 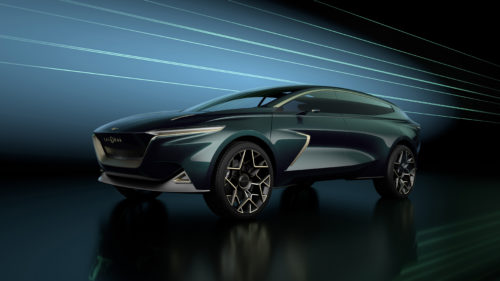 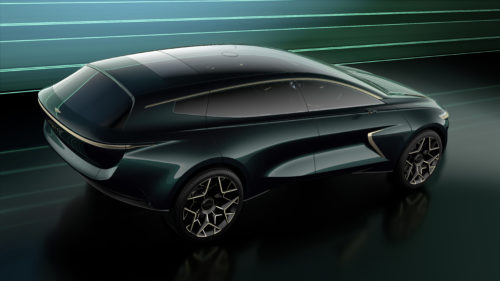 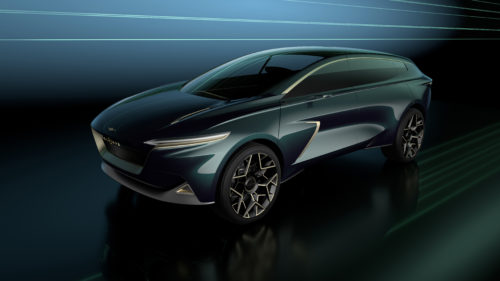 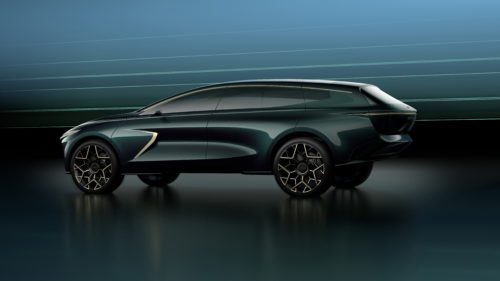 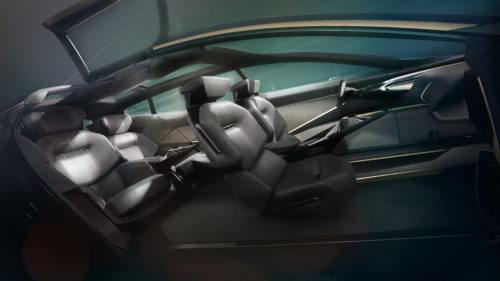 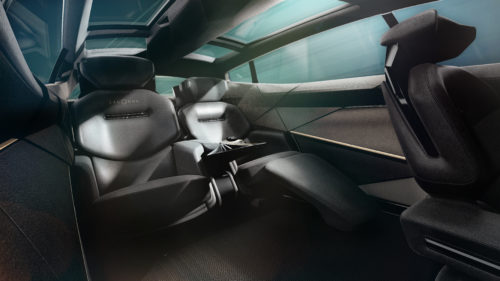 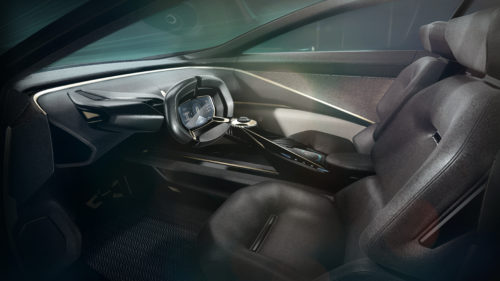 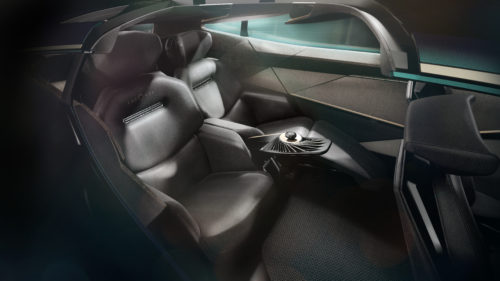 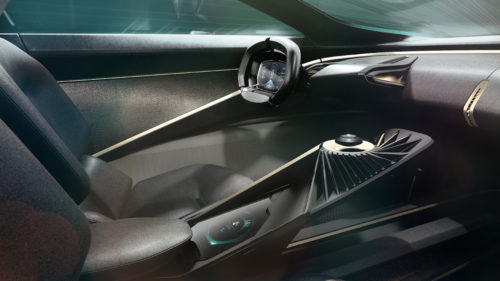 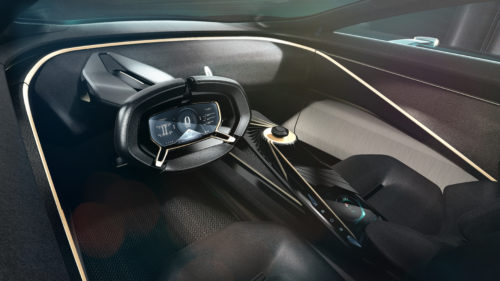