In addition to this, the ultra-successful trio of Paul Dalla Lana (C), Mathias Lauda (A) and Pedro Lamy (P) will return to defend their GTE AM world championship title in their trusty Aston Martin Racing V8 Vantage GTE.

The strength of talent within the crews reflects Aston Martin Racing’s intent to hit the ground running with the new Vantage, and the seriousness with which it takes the level of competition in the GTE Pro class in the FIA WEC. The GT categories are now the most populated with manufacturers in the series, with no less than five represented in GTE Pro.

All six drivers have played a role in the extensive development programme of the new Vantage GTE which has now clocked up more than 10,500 miles of testing over the winter. Having focussed on durability for much of this time, the team is now working on the performance and tyre development phase of the programme ahead of the WEC Prologue at Circuit Paul Ricard on
April 6, 2018.

For the first time in its history, the FIA World Endurance Championship will run over a 14-month period from summer-to-summer beginning in Belgium with the TOTAL 6 Hours of Spa-Francorchamps on May 5 2018. It will incorporate two 24 races at Le Mans, and a return to Spa-Francorchamps in 2019, as well as a 12-hours race at the famous Sebring circuit in the USA. The series will also include six-hour events at Silverstone (GB), Fuji (J) and Shanghai (CHN).

Team Principal of Aston Martin Racing, Paul Howarth, said “The FIA has reinvested in the World Endurance Championship, which is going to offer Aston Martin Racing the challenges it looks for when competing in the top level of motorsport. Out heritage in the sport, and our track record shows that we are all about delivering race wins and championship titles, and we look forward to fighting for both in the new Super Season format, which also offers us the opportunity to return to Sebring in America and race at great circuits like Silverstone and Spa.

"We are expecting the competitiveness of the GTE Pro category to be at the highest level ever, with a massive talent pool of drivers as well as leading car manufacturers, which will lift the standard of racing to a level it’s not seen before in WEC.”

John Gaw, Managing Director of Aston Martin Racing, added: "The evolution of the FIA WEC is moving in a great direction for manufacturers within the sport. The GT category offers a unique, realistic, achievable and most importantly a tough contested goal for prospective manufacturers when compared to the prototype categories. You only have to look at historic battles such as at Le Mans in 2017 to see that the GT category is alive with excitement and viewers of the series are offered the opportunity to see some of the world’s top racing drivers battling it out in cars they can relate to.

"The new Vantage GTE replaces the previous Vantage in the PRO category for 2018. Our successes with the previous car were documented on the global stage from our first race at Sebring in 2012 through to scoring the GTE Pro class win at Le Mans in its final season. We hope to replicate this success in the car’s final year in the AM category as a fitting send-off. The new car has been very impressive in pre-season testing and that is true testament to the whole team back in the factory who have worked synchronously with the design team at Aston Martin Lagonda and we are confident the new Vantage will be a big step on from its predecessor. We have two new drivers joining the factory driver roster for 2018 with Alex and Maxime partnering AMR stalwarts Jonny Adam, Marco Sorenson, Nicki Thiim and Darren Turner. These new signings reinforce our partnership and focus with FIA WEC and outline our strong intentions from the outset."

Marco Sørensen: 'I'm super excited for the FIA WEC Super Season. It's going to be really special to go into the next 14 months with a brand new car from Aston Martin Racing. I really want the results and that's all that counts in my head. With Darren we have already been racing together in the #95 at Le Mans and I know that he can do the job; I wouldn't want anyone else in the car so for me it's a perfect line-up. We just have to go and win Le Mans and the world championship again! That's the main objective'

Nicki Thiim: 'This is something completely new coming towards to us, especially with the new car and this new concept that the FIA and the ACO have come up with. It's going to be a historic season so I hope that at the end, it is one that we will never forget. It's great to have Darren back, always good to have a super-fast driver with a lot of experience in the car. It is something very special and something you really need for the long distance races like Le Mans. Let's cross our fingers, the last time he joined our car we won the world championship so I hope that is a good omen. I can't wait to get started again, we're all sitting at home and shaking just to get back out there. It's time to go racing.’

Darren Turner: 'Ever since I first drove the new Vantage GTE I’ve been looking forward to Spa. The car is a huge step forward from the old Vantage which already tells you a great deal considering the success of that car. The design team at Gaydon have created a fantastic new model and have seen great gains in the performance of the road car, which has given Aston Martin Racing the perfect platform to create an exceptional racing car. Every element of the car is improved and from the driver’s seat it feels like a significant step forward. It’s going to be very exciting for everyone going back to Le Mans with the new car. We couldn't have wished for a better result last year and if we replicate that in 2018 it will be a fantastic start to the new Vantage’s racing pedigree’

Alex Lynn: 'I'm extremely proud to be representing Aston Martin Racing with the rich history it has in the FIA WEC. The success it's had in the past couple of years is unprecedented. The car itself is beautiful and that is always the first hurdle to overcome; it has to look amazing! It's going to be a long season but every race we go to is going to be an amazing experience. Maxime and Jonny are two extremely successful drivers and I'm looking forward to sharing the #97 with those guys and hopefully we'll get a lot of success. It goes without saying that I want to become world champion. I think when you represent a team like Aston Martin you're here to win. They expect nothing less and neither to I.'

Maxime Martin: 'For me driving for Aston Martin Racing is really super-great. I'm coming from another manufacturer so I have experience of big teams, but Aston Martin has such a lot of history. It is a brand that is 100% dedicated to racing, so there is a lot to come and we have a bright future, especially with the new Vantage GTE. I'm really excited to see how how close the new competition will be. I worked with Alex at BMW in the N24 last year, though we were not in the same car, but the same company and I'm definitely looking forward to racing with him again. He has a lot of speed and a lot of experience in different series, just like Jonny. The only thing we are aiming for is victories and podiums, we will try to fight for the title and go for a win in one of the two Le Mans 24 Hours.’

Jonny Adam: ‘Really excited to join Aston Martin Racing again for the FIA WEC and really looking forward to returning to Le Mans. I’m super-excited to race the new Vantage. I’ve been part of the testing programme and the car is definitely a step forward all around. It’s nice to be a part of the ‘era’. It goes every bit as well as I think it looks on track. I can’t wait to get to Spa in May and see where the car is in comparison to the rest of the competition. I’m really looking forward to returning to the #97 car again with two excellent drivers in Alex and Maxime. We all want to showcase how good the new car is, and if we can, put a world championship challenge together and fight to win another Le Mans.’

Founded in 1913, Aston Martin is an iconic sports car marque of unrivalled heritage that has now entered its second century. With fresh investment, a new Chief Executive Officer and the strongest model line-up in the company's history the British luxury brand is looking to an exciting future. The company boasts state-of-the-art headquarters in Gaydon, UK, combining cutting-edge technology with hand-craftsmanship and traditional techniques. 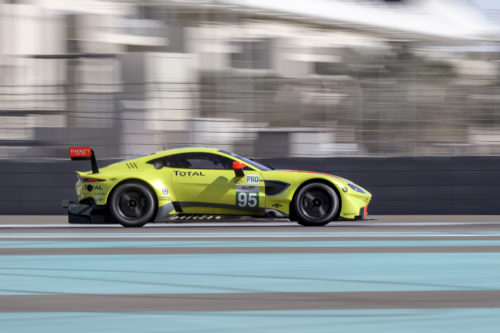